The art of effective couples therapy requires unique skills that differ from successful individual therapy.  Early attachment bonds are re-lived with couples and unresolved emotional pain is triggered such that escalations occur in a split second in your office. This almost never happens when working in individual therapy.  Many therapists believe this makes couples therapy too challenging. However, with the right tools, you can look forward to your work with couples and find it immensely rewarding. With your skillful interventions, redirection and support you can help partners learn how to become a powerful team working collaboratively to create healthier selves and earn a secure attachment with one another. 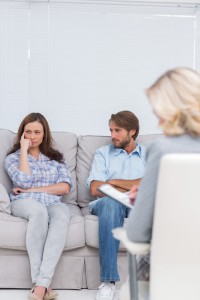 Here are 3 common mistakes you may have made with a couple which resulted in more work for you and less change for them:

1. You were following when you needed to lead.

2. You got swept up in their finger pointing grievances.

3. You were doing all the heavy lifting in the session.

1. Taking the Lead with Couples

One of the easiest ways for a session to spiral out of control is by failing to be a strong leader in the room, especially with a highly distressed couple.  This is something I have learned the hard way!  It’s important to know what you want to accomplish with a couple and lay out the structure of your work together as clearly as possible. This means being very active in your role with them because if you are not, they will simply repeat what they know – which got them to this place and clearly is not working.

Being a strong leader means being up front about your expectations of them and what they can get from you in return. Spend time educating them in order to help them understand how their emotional brains will hijack their relationship and create ongoing repetitive patterns of pain.  Circumscribe each of their patterns clearly, (most often based in early attachment relationships) and explain how they ‘trigger’ each other. Then let them know that your interventions will be aimed at helping them create relationship goals based on the values of love, caring and respect.

This type of leadership fills in their developmental gaps by providing lots of positive alternatives to what they are currently doing. It quickly begins to create a better feeling state between them, which is crucial to inspiring hope for a brighter future.

By expecting them to reveal more about their desires and difficulties, while at the same time growing their ability to understand the same things in their partner, you are helping them create a solid foundation of trust in their relationship. Without trust there can be very little in the way of authenticity and vulnerable self-discovery. Creating new behaviors, and therefore, new brain pathways, takes time and effort. Old habits die hard and couples need to be both patient and willing to do the work necessary.

Providing good structure to your sessions with goal setting that promotes developmental growth is the first step in great leadership. Getting their buy-in to let you coach them with effective strategies at the first sign of their destructive patterns, will facilitate transformation in big and meaningful ways, right in your office.  All of this will communicate to them that you are in charge so they can relax and learn from you.

2. Blame is the Name of the Game in Finger Pointing 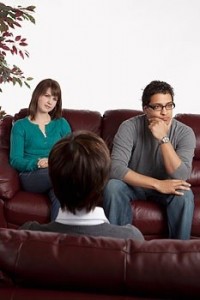 It is not that often (if ever) that a couple will come into your office and each partner says, “I would like to know what I’m doing to contribute to the break down in our relationship.”  It’s more common for couples to show up feeling defensive, hopeless and/or entitled to more than they feel they are getting from their partner.  Like a camera lens pointing outwards on the world, each partner has a focus on how the other person’s behavior is the cause of their unhappiness. Like in Karpman’s triangle, each feels that they are the victim – perpetrated on by their partner and hoping you will rescue them from their pain – all with minimal effort on their part.

Set the course of therapy by being explicit with them about one crucial shift you are insisting they make: that each of them refocus their lens on themselves so they can better understand how they are contributing to the impasse in their relationship. You want to show them how to take responsibility for autonomous change, regardless of how badly their partner may be acting. Once couples understand this concept it provides a sense of freedom and empowerment to become their best selves, even in stressful times.  For you, it shifts the couples’ therapy from negative reactivity to one of enjoyment and growth.

By focusing in this way, you will model that the most important change that you are promoting is through a way of “being together” that is self-regulated, caring, and curious.  Any problems they have, big or small, can then be handled effectively. Couples will learn that differences don’t end marriages – self-centred stubbornness and ineffective attempts at repair do.  By teaching them to be other-differentiated and at the same time, personally responsible to their own values and desires, this dynamic approach optimizes their ability to reach positive relationship goals, rather than remaining passively victimized by each other.

Have you ever said to yourself, “It seems I want them to change more than they do?”    It’s all too common for couples therapists to work harder than their couples – often feeling exhausted afterwards and dreading future sessions.

I sure used to.  I would hold out a vision of hope for a couple, ascribe exercises to practice at home, encourage participation from passive partners, and educate endlessly – only to have a couple stagnate, get worse or drop out of therapy prematurely.

It’s interesting to note that the success rate for couples who come to therapy is, as Dr. Pete Pearson says, “Exceptionally high when they have reasonably aligned goals.”  As their therapist you must help them articulate their goals, stay attuned to them and understand the degree of effort it will take on their part to bring their goals to reality.  If you haven’t done so yet, you may ask your couples to clearly define their relationship goals with a specific eye on identifying the most important change they personally will need to make in order to ease the distress in their relationship. Being  very specific like this creates the template for change and provides traction when one or both of them begins to regress into those old, familiar behaviour patterns.  These personal goals will guide the therapy and help them learn to define themselves more directly while at the same time incorporating a means of giving to their partners in order to make him or her feel loved and special. Stressing your clear expectations that they will put into practice what they are learning, to the best of their ability, leads to improved outcomes for them and takes the heavy-lifting for change off of you.

Here is how I applied this approach to a couple

Ken and Sally showed up in my office with a lot of accumulated baggage – both from early life experiences and from many years of unresolved hurt and neglect in their marriage.  They had a lot on the line with 2 young children. Sally had read many self-help books on relationships and felt like more of an authority on their problems and just a little better than Ken. She felt entitled to tell him what he was doing that was causing problems in their marriage. There was no doubt that he had his share of ineffective behaviors but Sally seemed stuck in an angry self-righteous way, blaming him for their troubles and unable to take full ownership of her contribution.

Ken grew up in an abusive and shaming home environment.  He learned that it was “each man for himself” so when he got scared, he quickly covered it up with angry attacks that shamed and hurt Sally deeply. This triggered her because she too grew up in a violent home.  She learned early on that being vulnerable was dangerous so she was very skilled at covering up her hurt with sarcasm, dismissiveness and general disdain. She had a deep unconscious need to ‘take over’ and yet hated him for being the “3rd child.”

A part of Ken liked that Sally over functioned and was like the mother he never had – doing for him what he could do for himself, but would rather not.  However, another part of him resented feeling like an incompetent child and he would let her know, in passive-aggressive ways, by ignoring her or “forgetting” to do something important.  A part of Sally was longing to emotionally count on Ken in a way she never could do in her family growing up.  Yet, another part of her liked the control ‘taking over’ gave her.

When they came into therapy they were both blaming the other for their marital breakdown.  They fought constantly with one another and had very few tender moments together. Both were high-paid professionals and like many couples I see, their relationship had deteriorated to one of parenting children and dividing up chores.

Being a strong leader meant interrupting the re-enactment of their unresolved early trauma with one another that left them believing that their problems were between them, rather than within each of them. Setting personal goals to be their best self, helped them to understand that while they were triggering one another, it didn’t mean they had to take it out on one another.  Instead, they learned to support each other to work through the pain – to work as a team to heal.  Through this process they created new bonds with each other that did not reflect the abuse or neglect they both encountered growing up. In getting Ken’s buy-in to overcome his passive aggressive actions and Sally’s buy-in to risk being more vulnerable, they were able to become better friends and overcome the hostility and hopelessness they felt about their future. Each was able to take ownership for being the agent of their own positive change.

This approach gave them the means to outgrow the symbiotic threats: “I’ll change when he shows me he’s changed” or “She didn’t do her part, so why should I be the only one who does it.”  These immature coping strategies leave all couples spinning their wheels, unable to stop fighting, or sadly, drifting further away from one another – and all too often, into the arms of someone else.

Therapy focused on strengthening under-developed aspects of both of them, especially the parts that recognize goodness, that can emotionally regulate and self-soothe and most importantly, takes full responsibility for being a better partner and friend.

Goals for this couple included spending time together each week that focused on having fun and not being task oriented.  It involved setting limits on all threatening behaviors that undermined trust and made being vulnerable with one another impossible.  It also included paying close attention to what they appreciated about one another and giving ongoing positive strokes for any and all efforts they saw their partner making.  Setting clear and ongoing goals which revolved around creating a sense of teamwork allowed each of them to resolve their trauma rather than reenact it.  This couple went from hostile dependency to secure functioning and saved the marriage they initially believed to be beyond hope. 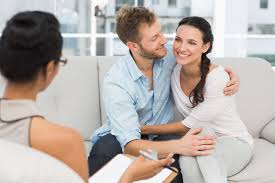 These tools, which I have learned over the years in my training at The Couples Institute, have helped me be a confident, effective and successful couples therapist.  I trust they will have the same impact for you.

Please feel free to email me with any questions or comments:

Wishing you much success,

For more information on my services go to: www.goodlifetherapy.ca