To confront or not confront – that is the question

I’m sure you have had those tense moments with couples when you ask yourself “should I confront this or not?” They are difficult moments and we often have a split second to decide. The truth is confrontation is essential in couples therapy. Yet, as therapists we often struggle with it, because of family and social conditioning that says confrontation is ‘rude’. Maybe you shy away from it because you fear you will scare off your clients, or because you were taught it’s therapeutically unsupportive. Or, perhaps you are afraid to confront an angry client because you had an angry parent and do all you can to avoid such interactions now. These are all real factors when it comes to helping clients get past their angry defences. What I’ve learned from studying and practicing the Developmental Model with Drs. Ellyn Bader & Peter Pearson is that confrontation is necessary to disrupt unhealthy patterns that keep couples stuck in regressed states.

The other day I was working with a couple who are struggling to navigate their way past a brief emotional affair that helped them to see that something was amiss in their lives. I did a strong confrontation with the husband at the end of the session, when his anger flared up at both me and his wife.

I saw that his anger is his way to push for a return to the symbiosis that no longer works for them as a couple.

I knew I had to say something.

And I had to say it strongly, to match his energy and get his attention.

“You have a serious anger problem and at some point, you will have to deal with this because it’s keeping you and your relationship stuck”.

We ended the session and I wondered if I had been too hard on him. Was my intervention effective and was the timing right? Maybe I should set up an individual session and explore it further one on one?

But before I had a chance to do anything, I received an email from him that not only touched me deeply, it confirmed how important the confrontation was in moving him forward.

It got his attention and put his focus where it needs to be – on his own growth edge. 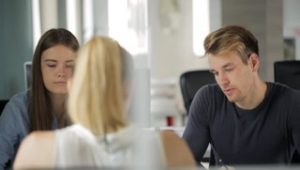 Here’s what he said:

I need to begin to break a pattern that has existed within me for many years and has become a fundamental, and at times automatic/thoughtless, mechanism for protecting myself from deeper more vulnerable feelings. I’m sure as I trace back, this was all learned from my father, who for almost all of childhood, into my adult life dealt with everything via anger and rage because it was an effective mechanism for control and power, when he felt powerless.

The light bulb went on…

As I’ve done some research, it seems that, this pattern of behavior is hazardous to the closeness, harmony, and trust I am deeply craving and would have wanted with my father and mother.

I’ve never actually thought about anger as the manifestation of feeling ignored, unimportant, accused, guilty, untrustworthy, devalued, rejected, powerless, unlovable, etc.  But as I think about times I’ve been angry, pissed off or mad as hell, it is usually some manifestation of these above feelings that’s at the core.

And why?  Because it felt good and addressing those underlying feelings was not within me.

Whether it was criticism, dismissal, or something else that made me feel invalidated, anger was a way for me to assert and protect myself from those feelings. There have been plenty of times where, now that I think back, my wife and I fought viciously and afterwards I felt like absolute shit and more miserable – only to apologize because deep down inside I knew I was wrong. However, the damage is/was done.

Here is a quote I read that sums this up:

“A person or situation somehow makes us feel defeated or powerless, and reactively transforming these helpless feelings into anger instantly provides us with a heightened sense of control…”

“The primal fear of these individuals is that if they let their guard down and made themselves truly vulnerable—freely revealing what their heart still aches for—a disapproving or rejecting response from their mate might lead them, almost literally, to bleed to death. And so (however ultimately self-defeating) the protective role of anger in non-disclosure and distancing can feel not simply necessary but absolutely essential.

Anger, however unconsciously, can be employed in a variety of ways to regulate vulnerability in committed relationships. Not only can it be used to disengage from the other when the sought-after closeness starts to create anxiety, it can also, ironically, be a tactic for engaging the other—but at a safe distance.”

According to the author, I need to ask myself not , “What anger control skills do I need to learn?” but rather, “What is my anger enabling, protecting against, or symptomatic of?”

Now while this all sounds well and good and I want to do it for myself, to be a better dad, husband and person…  putting it into practice and changing about 35 years of learned behavior is no small feat. But I guess it’s the same way you eat an elephant, one bite at a time.

Taking a risk that pays off…

Wow! I’m so glad this helped him create an opening in his life to see how much his past conditioning is blocking his attempts at a better marriage. This is the kind of shift that makes therapy work so rewarding.

As the Bader-Pearson model suggests, partners will get angry or passive to maintain the symbiosis rather than get more clear and direct about what they are experiencing, what they are wanting, what their fears are and how they can be engaged with one another better.

Being able to confront the anger will help them to chose whether they are willing to do the work necessary for growth or not.

Bader-Pearson give the following recommendations to therapists around confrontation:

1.  Don’t do it when you yourself are activated.

2.  Anticipate their resistance and get buy in:

“I want to say something now – are you ready to listen to it or not?”

3.  If you go too far and they do get defensive, own it and apologize.

4.  When you have made the confrontation, ask them “What do you think?”  It helps them know you are interested and that while you have to hold the mirror up for them to see themselves clearly, you are in a collaborative  process with them.

Let me know how you are doing with confronting angry clients in your practice. What did you learn in your family of origin about anger? How direct are you with both allowing your clients to have their healthy anger and confronting it when it’s keeping them stuck? I would love to hear from you in the comments below.

Until next time, I wish you much success in your practice of helping couples find love and adventure in their relationships.