My Love of India - 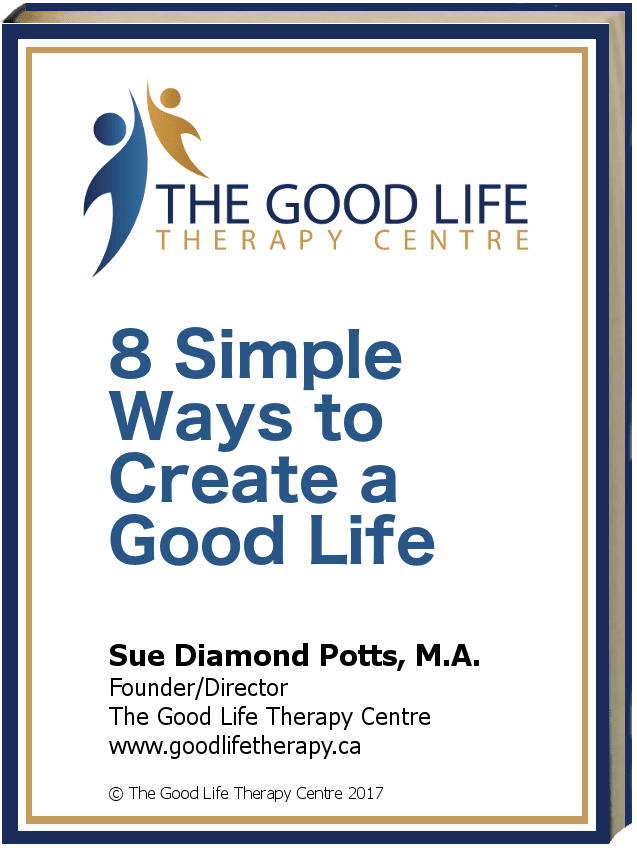 Even though I’ve been back from India for several weeks now, as I promised, here is a follow up of my short, but intensely beautiful trip. As part of this, I’d like to share with you my personal journey of transformation…

MY BIAS ABOUT INDIA

If you had asked me 8 years ago if I ever wanted to go to India, here’s what I would have said: “India, why would I go there?  All I see is Mother Teresa with those poor lepers – it’s awful, I can’t imagine anyone ever wanting to go there, let alone me.  No, I’m not interested at all.  It’s far too heartbreaking a place and what can any of us really do to make it better?”  All I could see was the poverty, the pain and the struggle of so many people with seemingly no way out.

MY TRANSFORMATION ON INDIA

By the time you are finished reading this, I trust you will have a clear idea on how my attitude was completely changed on India. In doing so, I want to inspire you, in some small way, to push past some preconceived idea you may have on any issue. Preconceived ideas and “contempt prior to investigation” are attitudes that keep us limited in life – they shut us down from experiencing all that is waiting for us.  I hope this becomes clear as I share with you my new love for India in general, and the experiences I’ve had specifically that keep me going back, over and over again. I just returned from my 7th visit in as many years. 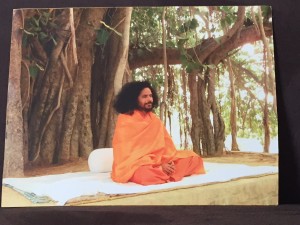 Guruji under the Banyan tree

The first thing that happened was that I met my spiritual advisor or “Guru” as they say in the East, in September 2008 – [7 years ago].  They say that “when the student is ready, the Teacher appears.”  That is exactly what happened to me. He is a realized Master who has founded an Ashram in Allahabad, India which is both a spiritual refuge and a research centre.  I was drawn to him in a way that can’t be explained logically.  This pull has a full body, existential, possibly past life quality to it that is equivalent in strength and manner to the attraction of iron filings to a magnet.  It’s not something I have to think about, and while everything I do in my life I consider to be a choice, this is one I cannot resist. 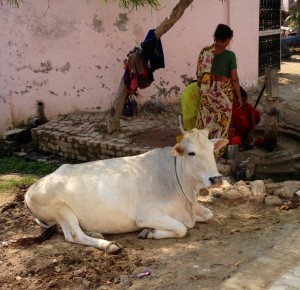 After that first meeting, my life began to transform and a few months later I decided I must go to India. This was in January 2009. As soon as I landed and got out onto the streets, I loved it. The first thing that really struck me was the sight of the beautiful, placid cows who lived freely without fear – of being run over or mistreated in any way.  Wow, how amazing – the fact that animals were not put behind fences or in cages – they simply roamed around freely. – and it was not just cows, but pigs, goats, sheep and yes, elephants. It appeared to me that animals and humans were co-habiting peacefully, maybe because the majority of Indians are vegetarian and do not see animals as their next meal! Maybe because the majority of people practice some form of worship, so they have more love readily available. Whatever the reason, I simply adored the concept and practice.

The second thing that was astonishing about India was the sheer intensity of the traffic.  There is every type of vehicle on the road, from huge trucks, to cars, to bicycles, to rickshaws and yes, elephants. There are also hundreds of people, dressed in the most fabulous colours, trying to get from one side of the road to the other. They weave their way across the mayhem and somehow, miraculously, do not get run over. There are very few, if any, traffic lights and I couldn’t recognize any typical rules of the road that anyone was following.

Vehicles would head towards each other and at the very last second, veer off, missing each other by a matter mere millimeters.  We even drove the wrong way down a multi-lane one-way highway for a short time, so we could get to an opening in the median and cross over to the other side.  This is apparently acceptable in India. It was very terrifying as this is not something that would happen in North America without a huge collision occurring. (I’m used to it now, so it no longer scares me).

But the most amazing thing about all of this, for the psychotherapist in me, is that there is no road rage – despite the congestion, the lack of rules, no traffic lights, animals all over the road, people moving to and fro – drivers take it all in stride. I have interviewed many of them, and while they admit to how stressful it is, they do not take that out on one another.  Instead, what I more commonly see, is patience, tolerance and a yielding to one another – an understanding that ‘we are all in this together’ and an acceptance of life as it is.

The trip I just returned from was very special, in many ways.  I’ve never been in India in October because I usually go in January, when the large Mela festival takes place on the banks of the Sacred Ganges River. This is a short walking distance from the Ashram I stay at.  At the time of the Mela, the Ashram is crowded with attendees from all over the world.  The Ashram residents and the family of my Guru are usually extremely busy cooking, attending to formalities, meeting with guests and helping those in need.

I consider the permanent residents at the Ashram as my family now – all of the monks and devotees who have committed their lives to the spiritual path.  I love hanging out with these people – they are really smart, extremely positive and push themselves to be exceptional in the most important way.  We have a lot of fun together and yet we take our life and commitment very seriously.  In October, it was a quiet time, there were few foreigners and so we had a lot of time to be together – having coffee, sharing stories and practicing.

Our daily meditation began with a stranding-recharging practice at 6:30 a.m. under the Banyan tree. The Banyan tree is unlike any tree I’ve ever seen. 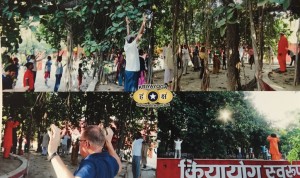 Morning practice under the Banyan tree

The branches grow outward and then reach down and attach to the ground, where a new tree sprouts up. This particular tree has immense spiritual importance.  In 1894, the most revered Babaji, a God-like Being said to be ageless and committed to helping the human race evolve spiritually, sat under this tree with his followers.  He was there to meet a Swami named Shree Yukteswar and request that he write a book comparing Eastern and Western religions. This was to show the world that these two religions were saying the same thing.  The book is called “The Holy Science”. 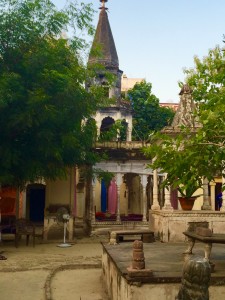 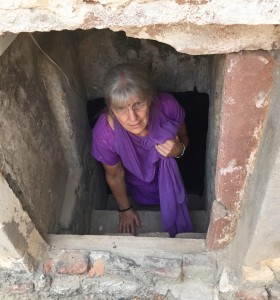 Coming out from the meditation cave

Across from this sacred tree there is an ancient Temple that was built over 100 years ago and dedicated to Swami Shree Yukteswar. Despite the fact the Kriyayoga Ashram and Research Institute property surrounded this Temple, its ownership was under constant dispute in the courts (something quite typical in India where squatter rights still exist).  Recently, the Ashram purchased the Temple lands and so I was able to meditate in this area. It was really something.  There is an underground cave and many other structures built for serious meditators to hide away undisturbed.  The vibration in the area is beautifully intense. I came away with a deep sense of gratitude, beyondanything one can express in words, that I had the good fortune to be connected to this rich history in India.

When I looked at India in the past, I had great disdain and aversion to what I believed India was.  I could not see beyond my limited perspective. It does not mean that poverty and corruption don’t exist in India.  It exists in spades – but it does everywhere. And it needs to be addressed and attended to, not feared.

More importantly, there is so much more to this great country that I could not even fathom before. I never saw the beauty and there is so much beauty – the color & design of the clothing, the artwork – marble carvings, gems and jewelry.  There is the love of all creatures, who are allowed to live in harmony with people. There is the spiritual resonance of a Land that has, forever in time, provided us with some of the most enlightened people the world has ever known.

GIVE US YOUR THOUGHTS

So, ask yourself – is there something that I have a closed mind about?  Am I willing to take the risk of exploring what else I could know on this subject?  Perhaps, you’ve had this happen to you and know it first-hand.  Please share your thoughts.  I’d love to hear them. 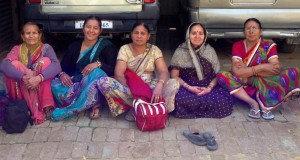 6 thoughts on “My Love of India”