What Africa Taught Me About Addiction & Trauma - 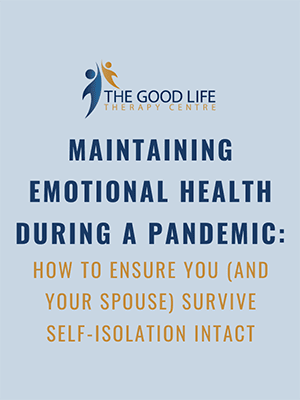 This summer my husband Bob and I had the privilege of visiting Uganda & Kenya. While we certainly took the opportunity to go on a couple of safaris and honestly felt like we were in the middle of a National Geographic movie, our primary purpose was to visit the school we helped donate money to build. 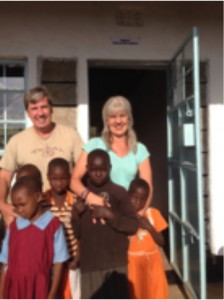 There were about 20 of us in our group who were traveling with World Teacher Aid (WTA), a Canadian charity devoted to helping bring education to children in Africa. They have a unique program in that the donors don’t just write a cheque, they go to the community, meet the people, and help finish the building. The school we helped fund was built in a Kenyan ‘IDP’ (Internally Displaced Persons) village, called ‘Lemolo A’. In most cases, these families have been driven out of their homes due to ‘tribal wars’ that are spurred by election violence. We listened to one young man tell us how, when he was 17 years old, his family barely escaped from his village that was set ablaze in the night – intended to kill everyone. While these people are promised new homes by the Kenyan government, this does not always happen. Lemolo ‘A’ appeared to be in the middle of nowhere, with absolutely no facilities, like running water. The “roads” were so rugged that it would be virtually impossible to get their without an all-terrain vehicle. Families here live in poverty – not knowing if they will have enough food to feed their children, let alone jobs to get back on their feet. A real ‘hopelessness’ can and does set in for many.

I asked one of the community liaison workers how much of an alcohol problem existed (not just in this community, but in general). He said it was bad. “Look around here – what do you think the men here have to do?” “Nothing”, I replied. “That’s right – they have nothing to look forward to and they feel useless, so they drink to escape from the pain”. I asked how they afforded it because obviously there is very little money exchanging hands. He told me that, for the equivalent of 10 cents, you can by this clear brew made from fermented sugar cane, which for all intents and purposes, we would call ‘moonshine’. He confirmed this when he told me that if you drink a glass you are basically unable to walk, let alone think or feel. It’s crucial to recognize that, while addiction is a serious medical condition needing treatment, social factors matter. Giving individuals a way back to their dignity has to be a fundamental part of motivating them to change.

I was also curious about how people get over their trauma – whether there were counsellors working with them or therapy offered in any form. I enquired to the local World Teacher Aid representative, Irene, who as the Founder of a local NGO, has her finger on the pulse of many communities in need. She told me about Shalom, the community where the first WTA school was built 3 years ago. They now have both a primary and high school in the community. It was our first stop and where we had our first taste of what I see as the unique African spirit. The entire 400 school kids were waiting in a group, dressed in their uniforms and singing welcoming songs to us as we arrived. We shook hands with all the teachers and discussed their work. This community has been completely placed on it’s feet as a result of the school, which became the central hub for all following improvements – roads built so the teachers can come and go – food planted and provided for the families, buildings built and so on. In fact, if you build a school, you are actually changing the lives and improving the future for the entire community. The biggest reason is that it gives them hope – hope for a brighter future for their children and for themselves. What Irene told me is that this community, although badly traumatized by their circumstances, are what she considered 80% healed. How has that happened? Have they had the best experts in the trauma field provide professional help? Actually, no.

What I learned from her is that it is “the community” itself that heals. She said that they all pull together and help each other get over their losses and through each difficult day. I told her that often in the West, when parents have been traumatized, they take it out on their kids and pass it on to the next generation. She quite frankly responded, “No, that does not happen here.” It really got me thinking about the fact that children are never alone, but surrounded by hoards of kids and many adults, and how women are surrounded by other women and men have each other – that this somehow results in a very different outcome.

Now, you may think this sounds too simple. I mean after all, what would that do for the profession of trauma counselling? It would mean they don’t really need us. Well, interestingly enough, Bessel van der Kolk, an expert in trauma, has discussed the findings on New York citizens and first responders who did not suffer from PTSD following the 9/11 attacks on the twin towers. The reason this population remained resilient was because they had family and community support at the time of their trauma and for some time following. So, it would appear there is some legitimacy to the claim that “community” is a key factor in helping overcome trauma. In fact, it may be the beginning of a new awareness in our field about how we can better help people heal from trauma.

What I experienced first hand from the community was, at times, massively emotional – in a very positive sense. We were embraced with open arms and open hearts. I shed many tears, moved deeply by their gratitude, their outright joyfulness and compassionate intelligence. I loved the Africans I met. I came back home wondering how we can learn and apply what seems to be a real solution to the kinds of suffering that many individuals, couples and families experience in North America. It has to do with eliminating isolation, loneliness and the hopelessness that can set in when a person feels overwhelmed by life.

What I learned is that addiction and trauma are universal and yet people can thrive if given the right conditions and especially the support to get back on their feet. I’m wondering if you think it is possible to heal better as part of a caring and responsive community? Moreover, how will it be possible for us to create this more for those of us who are trying to overcome addiction or have unresolved trauma?

Let me know what your experiences have been and what thoughts you might have on this topic. I look forward to hearing from you. 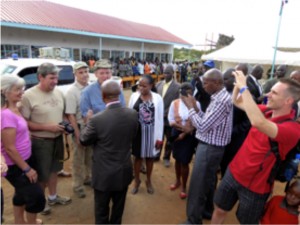 Pete, Bob and I talking to the Governor at the Opening Ceremony of the Lemolo A School. Irene is in the beautiful dress